Who stole a toy?

Looking into the picture can you investigate who stole a toy? 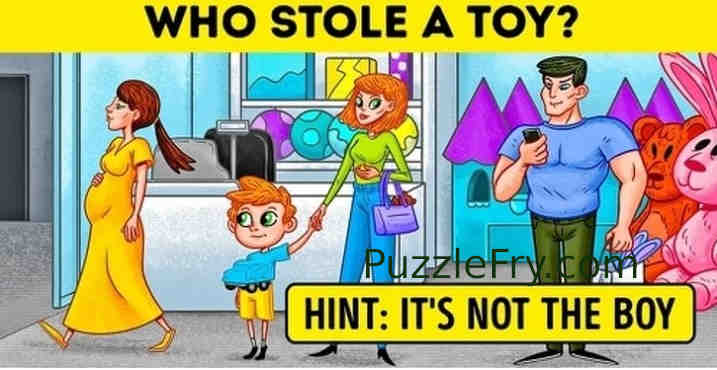 Reasons: remember the hint says “not the boy”

* Of all the people in the scene, she appears most tensed and rattled. Observe her body mechanics shown in the picture; notice the drag in her ponytail(hair) and her wide footstride, which clearly shows a hasty pace as opposed to a much slower pace that a heavily pregnant woman should have. [Even if there was a need for her to be such in a hurry, her posture won’t be that upright, she would tend to lean backwards, and carefully guarding her pregnancy with both hands. In other words that her free left hand should support her waist region supposedly].
All these suggest that she was hurrying to the exit as shown.

* Deductively, from the analysis above, her pregnancy is fake, meaning she was using it to conceal her theft, which inspired the boy to do the same being that the boy saw her in the act(observe the boy looking at her).
Or, that the boy playfully put his toy there and then she saw it as a good strategy and applied it. Whichever way, its still points to her.

* By the way, where are the things she bought or at least the the bag she suppose to have come with? Notice others carrying theirs. And then a lady who has been inconvenienced as a result of her supposed pregnancy came to shop without a bag(who does that. Lolz!)