There is a circular car race track of 10km. There are two cars, Car A and Car B. And they are at the exact opposite end to each other. At Time T(0), Both cars move toward each other at a constant speed of 100 m/seconds. As we know both cars are at the same speed they will always be the exact opposite to each other.
Note, at the center, there is a bug which starts flying towards Car A at time T(0). When the bug reaches car B, it turns back and starts moving towards the car A. The speed of bug is 1m/second. After 5 hours all three stop moving.
What is the total distance covered by the bug? 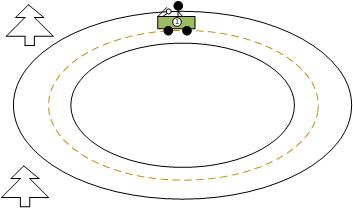 Since the bug is moving at a constant speed, the distance travelled in any given length of time will remain the same irrespective of how simple or complex the trajectory it follows. Since the speed of the bug is 1m/s, it will travel 60 x 60 x 5  = 18,000 m.