A very intelligent and kind Traveller was trapped by a King, King wants to check his intelligence and kindness at the same time.

So he sets up a scenario where he asks traveller to play the “Sword Killing” game.

The twist King makes is that, he make the traveller stand at 489th position in the circle, and asks traveller to choose any number of people he wants to make stand in the circle, where traveller’s position will be fixed (489th) and also gave him option for starting this game from any position (Sword Initially with this position) . The basic rules for the game still remains same.

Given:
==>> SP (Starting Position): – Position of person the game starts from.
e.g. if SP=103 >> At starting Person at 103th position have the sword, and the game starts in a way that he kills 104 and passes it to 105 and so on till only one survives, which in this case should be 489th position person.
==>> N :- Total no. of people standing in the circle at the starting. N includes traveller as well.
For e.g. if N=500, it includes person standing at 489(or the traveller himself).
It is also understandable that N>=489
==>> Traveller is very Kind and wants to kill least no. of people as possible. Although he is kind but he prioritises his life over others.
i.e. he wants to save himself, but by killing minimum no. of people.

So you need to determine what would be value of N and SP, if Traveller wants to prove his kindness and intelligence. 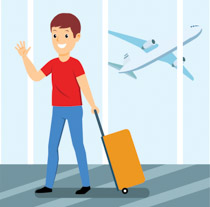 If the traveller is really kind he will make himself the starting point and kill the king with the sword and let all the others live.

When following the  rules he also should make himself the starting point.
The total number of people should be a power of 2 and the lowest power of 2 greater than 489 would be 512.
Although his position is 489, when he starts the game his actual position is 1.
When the sword did a full round all the even numbers would be killed.
After renumbering all positions in the next round also all even numbers will be killed.
In the end only person number 1 will be left (when the total number of persons is a power of 2).