Three people enter a room and have a green or blue hat placed on their heads. They cannot see their own hat but can see the other hats.
The colour of each hat is purely random. They could all be green, blue, or any combination of green and blue.
They need to guess their own hat colour by writing it on a piece of paper, or they can write ‘pass’.
They cannot communicate with each other in any way once the game starts. But they can have a strategy meeting before the game.
If at least one of them guesses correctly they win $10,000 each, but if anyone guesses incorrectly they all get nothing.
What is the best strategy? 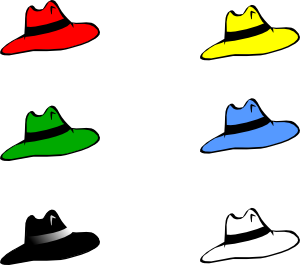 The condition that “They cannot communicate with each other in any way once the game starts” makes it impossible to device any strategy whatsoever, because it means that each of them is on his own and answering unaware of anything other than the others’ hats. (This is because writing one’s assumed answer on paper also amounts to “communication” if the answer can be seen by others. )

If the ‘writing own answer’ is NOT counted as ‘communication’, here’s how they can device their strategy:

Background: Since there are only two colours and three people, if one person looks at others, there are only three possible sights he can see:
(a) both the others wearing green hat
(b) both of them  having blue hat OR
(c) one of them blue and the other, green.

Strategy: They decide that:

(a)The first person to answer, say, A, will write answer as follows: If he sees both the others wearing same coloured hat, he will write THAT colour. Otherwise, he will write ‘Pass’.
(b) If A has written a colour, the second person, say, B, knows, from (a), that he himself is wearing that coloured hat. Hence, he will write that colour, and the third person, say, C, also will do the same. (With this, both B and C have answered correctly. Game over. They win.)
(c) If A wrote ‘Pass’, it means that B and C are having different colours. B can see that C is wearing, say, green. Since A’s answer indicate different hat colours for B and C, B can deduce that he (B) must be wearing the other colour, blue (or vice versa). So, he writes ‘Blue’. C also follows the same logic and guesses his hat colour. Game over. They win.