All his relatives and friends know John’s Debit Card PIN. Today John makes a profit of INR 10,000. So he decided to have a party and he invited his 3 friends: Katrina, Cook, and Anderson.
He was in a hurry to reach the home as soon as possible. Coming back to the home he stopped to buy some snacks. While taking out his wallet from his right pocket, by mistake he dropped some money on the ground and didn’t notice that. And this type of incident mostly happens.
His friends arrived, and they started playing Ludo on a square shape wooden table as Katrina in his left, Cook in the front and Anderson in the right of the Ludo board.
They put a bet on the winner and in the end, John loses the bet and he gave money to the winner. One of his friends is getting through economically tough conditions so he decided to steal from John’s wallet.
The next day, John noticed that his debit card and some money were missing so he complained to the police station. Police investigated they found last transactions done by his debit card on an ATM booth. In CCTV footage police noticed that the culprit was wearing a mask. So the police were not able to recognise the culprit. Who is the culprit? 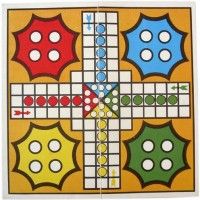 Anderson, it could be – that’s the only possible derivation based on info available.


Given this information, it follows that it is easier for a person standing / sitting on his right side to flick the wallet from his pocket, compared to someone on the left / front /back etc. Later, while playing the board game, it was Anderson who sat on John’s right, If John hadn’t shifted his wallet from his right pocket to somewhere else after buying the snacks, it is Anderson who would be in the best position to take it.