Guess it is a murder or suicide?

Guess it is a murder or suicide? 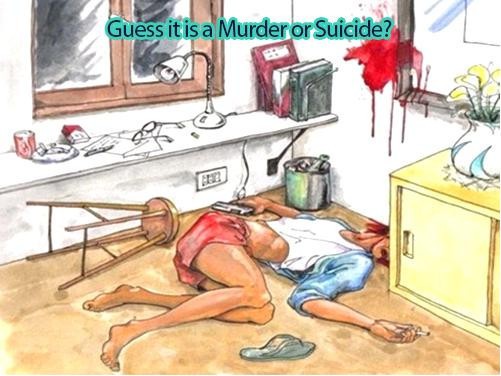 -There is only one slipper in the photo that in the ground .now if he shot himself he should have his slippers on his feet .or both his slippers should be on the ground where he placed it .But it is not in this case.It show he lost the slippers during a struggle with the murderer.
– Now Cigarette in left hand shows he is a left handed person, He can`t shot himself by right hand.
– Now he is shown written something on a paper .but the table lamp is not connected with the wall socket.
– Now he is holding a cigarette in his left hand.he should have dropped the cigarette before shooting  if it is a suicide.
– Now he is shown shot in his right side of head and there is blood in the wall on  the right side.
– Now if it is a suicide the impact of bullet should have caused him to fall to his left side but he is shown fall to his right side.this shows a presence of third person who caused the body to fall on the right side

The slipper(s) seems a strong clue. But not the rest. The table lamp not being connected doesn’t prove anything, because it is not necessary that the lamp must be on to write a note. Further, it is not necessary that he should have dropped the cigarette before shooting himself. (Of course, it is very likely that he may drop it on the impact of the shot, but that makes no difference whether it’s murder or suicide.) Further, he’s lying partly on his left side (not right), which is natural, given the fact that he was shot on the right side, as you have pointed out. On the other hand, even if he was shown lying on his right side, it doesn’t necessarily prove the presence of another person.

Its a Murder. Only one point is enough to find this out.. Cigarette.. No one smoke cigarette when suicide..