There is a rich man living with two other people his butler and his maid. One day the rich man is sitting at his desk counting his money, preparing to deposit it at the bank. When he is done he goes to the bank, but when he arrives, he realises he left a $100 dollar bill on the desk. So he quickly called the house and told the butler that he forgot the $100 bill on the desk, and he will come home now to pick it up. When he arrived home he asked the butler what he did with the bill, the butler said he put it under the green book on the desk. When the rich man looked under the book, it wasn’t there, so he asked the maid if she saw it. She said she saw the $100 bill when she was dusting and put it between pages 67 and 68 of the green book. Right then and there the rich man called the police, and knew who stole it, even before the rich man checked inside the book to see if the $100 bill was there. How did he know? 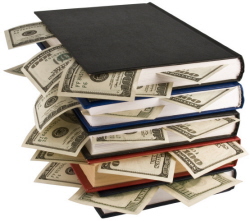 Maybe the book has less than said number of pages? Or it could be that usually in a book, pages 67 and 68 are on two sides of the same paper?