One day, all the courtiers from Akbar’s court were gathered in the assembly hall when one of them told the Emperor that all his valuables had been stolen by a thief the previous night.
This shocked the Emperor to his core as the place where that courter stayed was the most secured in the kingdom. The Emperor thought that it is not at all possible for an outsider to enter into the courtier’s house and steal the valuables. Only another courtier could commit this crime. He quickly called Birbal to identify the thief.
Birbal thought for a while and successfully solved the mystery by identifying the thief in just one statement.
What did Birbal say? 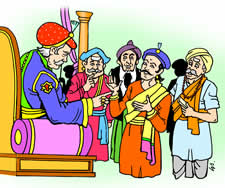 Guards did it that’s why no one saw it