The King of a distant land had heard that Birbal was one of the wisest men in the East and so desired to meet Birbal. He sent Birbal an invitation to visit his country.

In due course, Birbal arrived in the distant kingdom. When he entered the palace he was flabbergasted to find not one but six kings seated there. All looked alike. All were dressed in kingly robes. Who was the real king?

The very next moment he got his answer. Confidently, he approached the king and bowed to him.

How did Birbal know who was the real king? 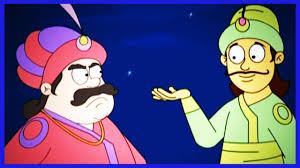 this is repeat of old puzzle .Pls dont  do this so fast