On an Island, lives a population of highly intelligent dwarfs. The dwarfs all look exactly alike, but only differ in the fact that they are wearing either a red or a blue hat. Striking however, is that none of the dwarfs knows what the colour of his or her hat is. This is because it is forbidden to speak about the colour of the hats, and there no mirrors on the island. Nevertheless, the dwarfs do know that there is at least one dwarf with a red hat.

Once every century, there is a big party on the island, to which initially all dwarfs will go. However, this party is only intended for dwarfs wearing a blue hat. Dwarfs with a red hat are supposed not to return to the party the next day, as soon as they know that they are wearing a red hat. 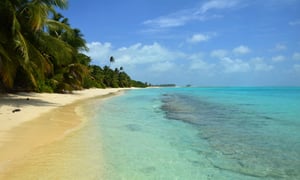