After this process, the winner is the one who has the better poker hand. For the benefit of those who have not played poker, these are the highest ranking hands, in decreasing order of value:

Royal Flush: the A K Q J 10 of the same suit.
Straight Flush: any five consecutive of one suit. Highest card of the five is the tiebreaker. No one suit is more powerful than another.
Four of a kind: all four of one rank (i.e. four aces). A hand with 4 aces outranks 4 kings, etc.
Full house: a pair of one rank and 3-of-a-kind in another rank, i.e. Q Q 8 8 8.
Flush: Any 5 cards of the same suit that don’t satisfy #2.
Because of the clear advantage of player 1, the win is given to player 2 if the hands are equal in strength.

Which player would you rather be? What strategy do you use? 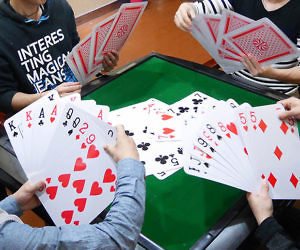