One day, their relative came by to see how they were doing after their father’s death. The three sons told him their problem. After thinking for a while, the relative said: “I’ll be right back!” He went away, and when he came back, the three sons could divide the cows according to their father’s will, and in such a way, that each of them got a whole number of cows.

What was the relative’s solution? 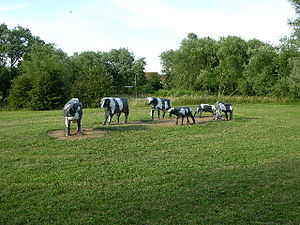